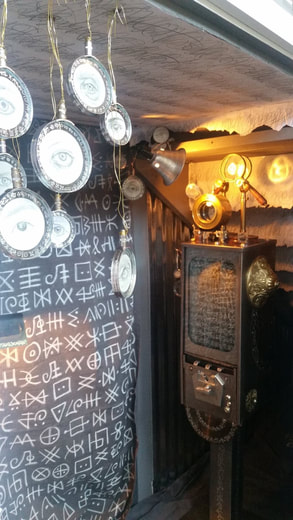 Lisa Huffaker is a poet, musician, and visual artist. Her poems have been published in Southwest Review, Poet Lore, Measure, Able Muse, Southern Humanities Review, and elsewhere. She won the Morton Marr Poetry Prize, and has been nominated for the Pushcart Prize.  Her project, White Rock Zine Machine, in which she transforms retired vending machines into whimsical sculptures offering tiny books by Dallas writers and artists, has been celebrated in D Magazine and The Dallas Observer, and awarded grants by the Dallas Office of Cultural Affairs. A classical singer by training, she sings with the Dallas Opera. She teaches creative writing through the Writer’s Garret, and presents monthly art-inspired writing projects at the Nasher Sculpture Center. She recently served as a Visiting Artist at the Dallas Museum of Art, where her installation, Sound/re:Vision, invited visitors to interact with a music box Zine Machine, compose their own chance music, and create zines inspired by a playlist ranging from opera to gamelan.

​In building Code Room, I attempted to create an environment that resonates with meaning that cannot be named. It is a very personal inner space, full of encoded truth about what it is like to live inside my individual consciousness. I am driven by a longing for connection and understanding, and painfully aware of the gap that never seems to close between my own inner life and that of others. But even where language fails, there seems to be a resonance or glow in that gap between me and other human beings, and this is what I have attempted to convey in a visual and material form. There are three types of asemic (meaningless) writing in the space: a non-alphabet of glyphs, a rapid, cursive-form of that non-alphabet, and superimposed layers of actual handwriting, too dense to read. That unintelligibility allowed me to write freely about all sorts of things I am not able to articulate aloud. The space is guarded and inhabited by many eyes suspended in glass lenses. They are there both to create the sense of being watched, and to represent the reading eye, which is always attempting to decode and draw meaning from whatever it sees – even though it is essentially illiterate in all but a narrow range of information. The cascade of torn papers receding into the stairwell are meant to recreate the feeling of being drawn deeper, trying to “read” a world that can never be read, because it simply is. But as impossible as it is to transcend that inchoate space, it is rich and full of significance – which is why this space is full of gleaming gold. This is a cockpit to deliver a single passenger into human inner space: a person may enter, sit in the chair, and activate the vending machine almost as an oracle. The machine delivers tiny handmade books of art and writing – zines – made by artists and writers who have meditated on the idea of code – all the ways we house, convey, translate, or obscure meaning. All these offerings are attempts, either to jump the gap between us, or failing that, to portray and explore it.