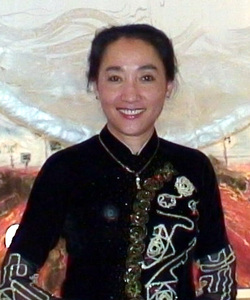 Nguyen Thi Quang Vinh was born in Vietnam.  She is a Professor of Art at Hue Fine Arts University,  Vietnam, where she has been on faculty since 1993.  Vinh also serves as Chairwoman for The International Women's Artists Association of Vietnam (INWAAVN), since 2004, and she is the organizing Director of The International Contemporary Art Exhibitions Conference Workshops for the organization.  She received a Master of Arts degree at Texas A&M University-Commerce, USA in 2012. VInh has participated in 119 National and International Contemporary Art Exhibitions in the National Museum and Art Centers of Vietnam, Thailand, Australia, Korea, China, Finland, Japan, America, and France.

In reference to the history of traditional Asian silk painting, particularly in Vietnamese silk painting, from the 19th century to the 21st century, artists have been influenced by traditional drawing techniques.  As developments in art continue to expand in Vietnam, Vinh acknowledges her need as an instructor to innovate the curriculum’s teaching method, by introducing “New forms of silk painting” at Hue University. Her intention is to challenge traditional approaches to silk painting by aggressively activating the silk material itself -- primarily the properties of transparency and translucency, in combination with fiber, yarn, painted and drawn imagery.  Her works have been influenced by various traditions and modern techniques, maintaining an individual style, seeking out inventive techniques to further expand the bounds of Vietnamese art.   Her goal is to create three-dimensional structures that incorporate multiple hanging panels which allow the viewer’s vision to penetrate through the transparent and translucent layers.

Vinh's silk sculptures are used as a medium express culture, expertise, and experiences. Her research broadens the realm of possibilities for the construction and properties of silk painting for both Eastern and Western viewers, relating to historical and contemporary art contexts.

Born in Vietnam
Professor of Art