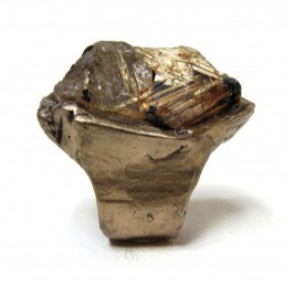 At the age of six Susan Ritter declared to the world, “When I am big, I want to be an artist.” Now grown, she is an artist and designer who finds herself influenced by many things, including—but not limited to—the smell of concrete after rain, the tendencies of decadent  fabrics, the color of the sky, the sound of a wooden screen door springing shut and even … a cat’s yawn.

Obsessions with energy, texture, movement, form and New York City led her from formal training in metal-work, painting and printmaking to working closely with artists Nancy Spero and Leon Golub. “My work is an extension of my personality. Leon once described me as a court jester—the person who distracts on the one hand, while not mincing words and speaking the truth on the other. Clearly, this can get you into trouble—something I embrace wholeheartedly.”

Her interest in making jewelry started when she picked up a rock and some wax. She fashioned a style that produces bold, delicious, gorgeous works of texture and color that she believes “empowers the wearer and impresses friends and strangers.”