CATHEY MILLER was born in 1963 in the Bay Area of Northern California. Upon graduation from Art Center College of Design in Pasadena, CA in 1985, she moved to New York City where she freelanced as an editorial illustrator. In 1987 she moved to Dallas and established her own art studio, which catered to Interior Designers, and later branched out into theatrical backdrops, and scenic painting for television.

Since 2001, the subject of her personal artwork has been the mythical planet of Cathedonia, a place she invented and populated with only her closest friends, just barely beyond reach of the Hubble Telescope. Her amateur studies in particle physics convinced her that she existed simultaneously in a parallel universe, flying around in a spaceship, drinking celebratory large beverages, and battling ludicrous monsters.

Through stranger-in-a-strange-land scenarios, Cathey explores questions about space, time, identity, gender, and reality. She uses a painterly approach to picture-making to suggest an interconnectedness between the forms in space, with color becoming an entity in the work, leading the viewer's eye. There's a tongue-in-cheek seriousness to her ship captains, fictional tv detectives, soccer players, and astronauts . . . engaging the viewer with defiant stares, Amazonian posture, and moxie. The painted images are metaphoric, communicating Cathedonian ideals of truth, beauty, desire, and romantic heroism.

MARK S. NELSON was born in 1975 in Denison, Texas; a small town north of Dallas. His interests in art, graffiti, punk rock, technology, skateboarding and pop culture brought him to Dallas in his early twenties. His work is playful and innocent despite its darker mysterious undertones. It is easy to recognize by his unique use of color combinations and compositions. His paintings explore concepts like self perception, time, mortality, spirituality and our complex relationships to the always expanding world around us. His current works are representations of familiar and unfamiliar objects placed together in unorthodox scenarios. Like an odd dream, these combinations become a window into the imagination.

About his work, the artist states “These paintings start with a smooth level horizon, desaturated color palette, and transitional lighting. This creates an eerily peaceful environment for things to begin to happen. This is where I tap into a collection of small sketches that I have been working on the last few years; mostly abstract objects, looking more like rough ideas for non-objective sculptures. As I look through these small drawings, I try to find something that really jumps out at me, something that evokes not only a sense of aesthetic pleasure, but something more. Something that I only know when I see it. Then, I combine these objects with the more familiar everyday objects in my life. These are painted in a layered fashion representing both my subconscious and conscious mind. As the layers of imagery are combined, a small scene begins to emerge; a dream like place, bound by time and space, but blurring the lines of what is real and what is imaginary."

Mother-and-son partners Susan Roth Romans and Jordan Roth operate Ro2 Art, a full-service gallery and consultancy in Downtown Dallas, representing a diverse group of emerging, mid-career, and established contemporary artists, many with ties to the North Texas Region. At present, Ro2 Art focuses on the exhibition and sale of work in all visual media at the gallery in the historic Kirby Building, as well as through public exhibition programs in partnership with Downtown Dallas, Inc., The McKinney Avenue Contemporary, and The Town of Addison. Ro2 Art has been named Dallas Observer's Best Art Gallery and was presented with the 2012 Obelisk Award for small business by the North Texas Business Council for the Arts. Ro2 Art is a proud member of CADD, the Contemporary Art Dealers of Dallas. 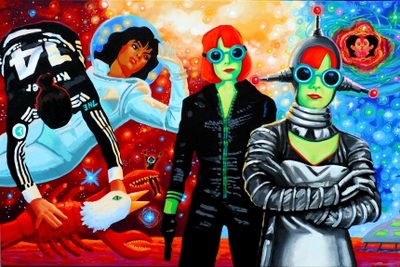