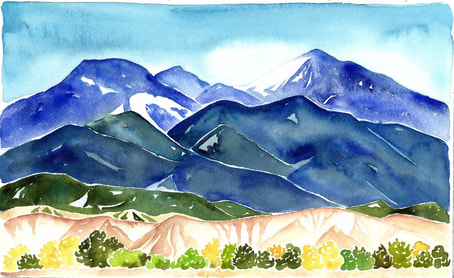 ​Artsy Page
​
About the Artist
Scott Winterrowd has made work in watercolor and print media over the last twenty years. His larger body of work is primarily drawn from travel related imagery, postcards and roadside culture. More recently his work centers on depicting the southwestern landscape, specifically capturing sites often painted by early twentieth century artists working in Texas. His works invite us to explore the diversity of Texas landscapes, from views of the Big Bend region and the woods of East Texas to the Dallas area where the artist now resides. A native of Fort Worth, Scott Winterrowd has made a career working in the art world. He has worked at major museums including the Amon Carter Museum, the Dallas Museum of Art, the Meadows Museum, SMU and the J. Paul Getty Museum in Los Angeles. He is currently Director of the Sid Richardson Museum in Fort Worth.
​
Artist Statement
This past year saw a return to New Mexico for me, which has long been a source of inspiration in my work. As usual, part of my reason for going there was to teach about art made there in the twentieth century - so I found myself once again visiting sights were famous modern artists worked as well as revisiting some of my favorite landscapes. I am always drawn to the area around Los Alamos for its explosive history in relation not only to the development of the Atomic Bomb but also the eruption of a supervolcano around 1.47 million years ago, visible still at the expansive Valles Caldera. I spent a great deal of time in Taos and was able to visit a number of ancient sites related to the still thriving pueblo culture there. As my work is always about place and travel often referencing roadside culture through destinations and postcards, I was struck by the final demise of an old and dear subject of mine, the closing of a string of Stuckey’s travel stops along I-40. My earliest series was documenting abandoned and transformed Stuckey’s throughout the region, a subject I have returned to over the years. Seeing the closure of the chain of stores along I-40 from Gallup, New Mexico all the way to Adrian, Texas, signaled the end of an era. When I came upon the fire ravaged ruin of the Stuckey’s outside of Tucumcari I felt the passing had to be commemorated.