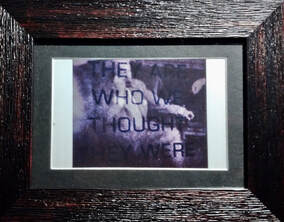 Robin Myrick's work is rooted in conceptual practices and hybrid forms. Her projects often engage the ephemeral or mediated moment as expressed through television and film, portraiture and the rhetoric of identity, politics, consumerism and disaster. As a photographer, Myrick uses a range of lo-fi methods and everyday materials to create visual disruption on the fly. Most of the layering, glitch and other abstraction in her photos is captured in-camera, and through experiment rather than design. This aspect of her visual art practice continues to expand along with her collection of cameras and mediating agents. The latter are mostly items upcycled after they've served their intended purpose in her home or elsewhere. As a writer, Myrick often pursues creative projects that examine language and subculture in American life. She is the author of I AM THIS STATE OF EMERGENCY (2020, Surveyor Books), a docupoetic look at the fraught act of conversation in an era where politics infuses everything. She also writes fiction and is the author of five plays. Some of her major works have explored aspirational fantasy in mid-century cookbooks, simulation and themed environments, disability, the go-go 1980s, and the complicated dynamics of reality. Myrick is also a founding member of the art collective Twentieth Century Creatures, and was a member of the celebrated Dallas collective In Cooperation with Muscle Nation (2011-2014). Across her career, her writing/photography has appeared in a wide range of digital and print publications as well, including daily newspapers, alt weeklies, art journals and music magazines.