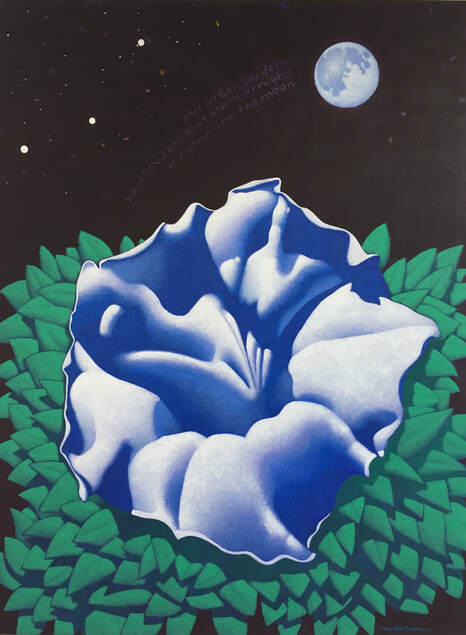 Moonflower with Haiku, 2019, Acrylic on Canvas, 48 × 36 in
Before all of this came down I had started a relatively large painting of a mockingbird that will include a hand lettered haiku in the same vein as some of my paintings in last year’s show, “SuperNature.” It continues my current interest in portraying my vision of nature. I have to deal with all of the quarantine issues in real life so I use painting as something to take me out of it, rather than as something to keep me in the mindset. And my work is more about subjects that are perpetual and this is a temporary circumstance. At least I hope it is.

​ZC That’s very interesting. What drew you to include poetry into your newer works?

RMC I started writing haikus in my sketchbook during a two week hiatus in New Mexico. I think haikus are observations, often of nature, like my paintings mostly are.

I sometimes try things to take a painting beyond a simple record of what I have seen or thought about, not that there's anything wrong with that. Sometimes that works out and sometimes it doesn't. I decided to add the haikus as a written commentary on the painting or its subject. With those pieces I have the main subject, then the background begins as a sort of expressionist polychrome underpainting that's then painted over with a single color, with some parts of the underpainting still visible or only partly obscured by the overpainting. I use a liquid masking agent to letter the haiku before the overpainting. After that I peel the masking agent to reveal lettering. I don't usually work with a lot of spontaneity and this process adds some of that.

​ZC Your work also explores folklore and Americana. Did growing up around a ranch influence that?

RMC in a couple of ways, yes. I didn't really take to the farm/ranch life but it was an unavoidable everyday reality. So part of my escape was in my head. I read a lot and was drawn to mythology, science fiction and fantasy. 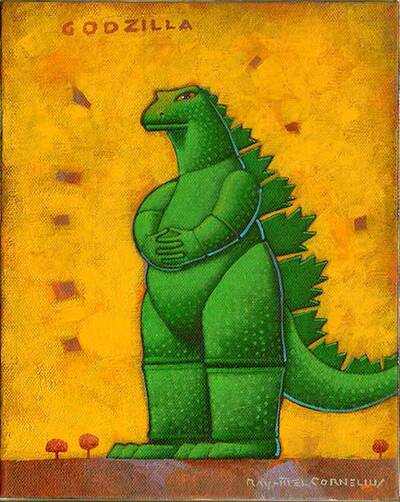 Giant Movie Monster on a Small Canvas 2, Acrylic on canvas, 10 x 8 in
Some of my paintings have explored those subjects through personal interpretations that no one would probably pick up on and some, such as three of the paintings in “SuperNature”, one depicting Godzilla, one of King Kong and one of a flying saucer, may be more recognizable.

​While I was "in" the "cowboy life" I wasn't "of" it so I had a detached look at the culture. When I was a teenager there was a sharp divide between the cowboys, who dressed and acted the part, and the hippies, who did likewise. I wasn't in either of those groups although my sympathies were with the hippies. But I understood that real cowboys have always been just guys trying to make a living with survival being their primary concern. For a while, during the Bush administration, I made some paintings that recontextualized the image of the cowboy as a being one with nature instead of at odds with it. I didn’t like the way Bush was considered a “cowboy” with his lust for war and destruction for the sake of profit and I wanted another view of that mythos.

ZC Going back to your past, you did not start off as a painter, correct? A past in illustration I believe...can you explain the transition from doing commercial work to where you are now?

​RMC From as early as I can remember I used drawing as a form of self-expression and it was media art, such as book and magazine illustrations, that was the first example of how to put that impulse to practical, for lack of a more romantic term, use. My first ambition was to be an illustrator and so that’s what I studied in college. I became equally interested in the concepts of fine art, but it was always a major kick in seeing an image I created on a book cover or in a magazine or newspaper, especially when my name was credited. 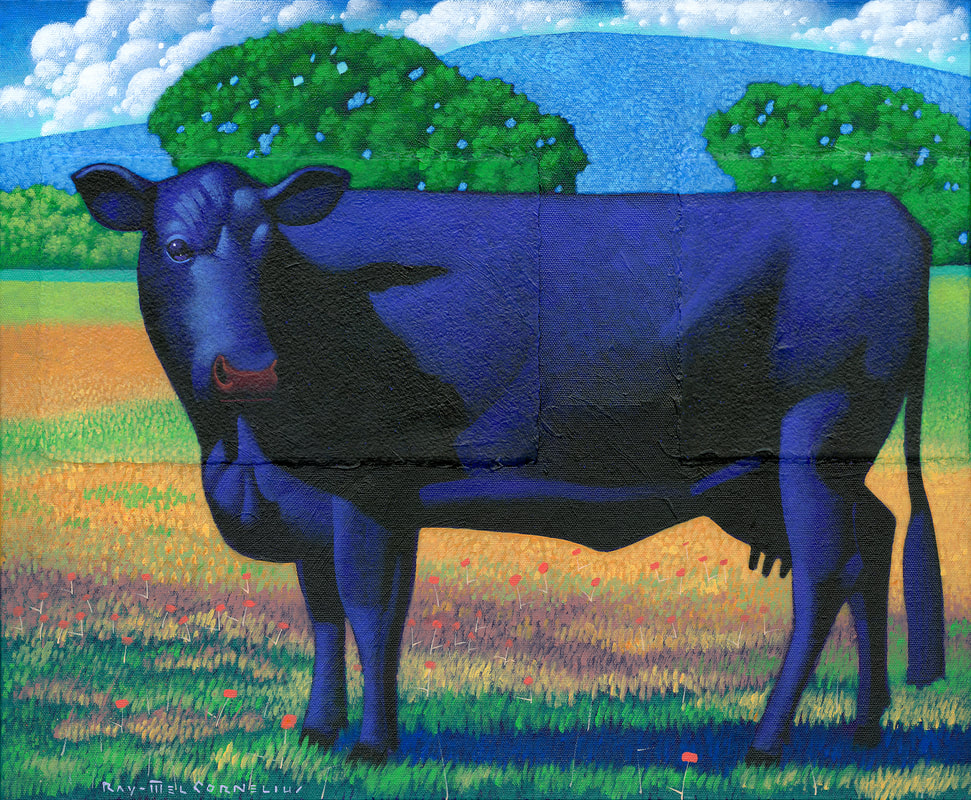 Mary Wollstonecraft Shelley, acrylic on paper and canvas, 16 x 20 in
In the long run, practical though that was, it became less and less satisfying to be making work that was only a response to another form of communication. So, I started to exclusively make paintings that were of interest to me.
​
Sometimes my work is described as "illustrative" in appearance, and that's not always intended as a compliment. I think I understand the origin of that, whether it's considered positive or critical. The work is usually considered "tight", a word I'm not crazy about, rather than "loose" or more physically expressive. I believe that I would have worked the same way had I pursued a fine art practice from the beginning because it's just the way I work. I'm analytical and I plan ahead what I'm going to do, which as I said before takes a lot of spontaneity out of the process. On the other hand, I'm not a fanatic about that. For example I don't recreate color studies so those choices are usually in the moment.
ZC Did the buildings you choose to paint have any significance to you, or simply landmarks of your everyday commute?
​
RMC They were literally what I saw every, or almost every, day. At least one of them was of more interest beyond that, such as "Boarding House", which was rented by Lee Harvey Oswald. But most were more interesting to me based on the architecture or some eccentric element, such as "Sister Hope." 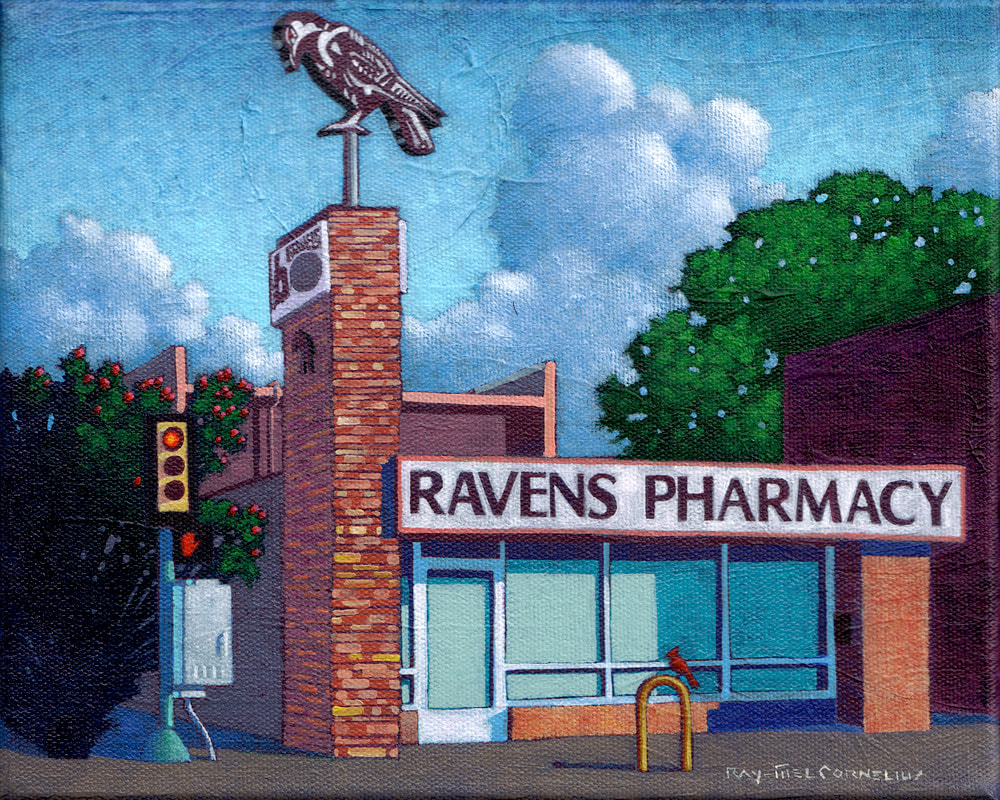