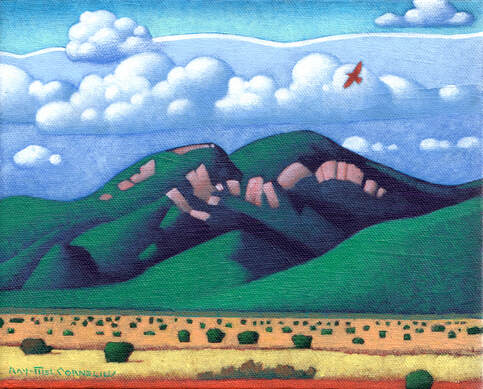 About the Artist
Raised in a small town in Northeast Texas, Ray-Mel Cornelius found the inspiration of wide-open spaces and its inhabitants to be the catalyst for his work. Reflecting his interest in landscapes and the mythologies accompanying them, Ray-Mel begins with a dark underpainting and defines the form by applying layers of light tonal values; allowing him to explore representational and abstract forms while achieving defining forms. His works are best described as his interpretations of folklore and Americana.

A professional artist since 1977, Ray-Mel has been recognized in forums such as AcrylicWorks: The Best in Acrylic Painting, The Artists Magazine, Drawing Inspiration: Visual Artists at Work, Fantasy Art Magazine (China), Southwest Art Magazine, Spectrum: The Best in Fantastic Art, Strokes of Genius: Exploring Line and Design and Composition. His work has been included in exhibitions hosted by Clermont College Art Gallery in Cincinnati, Ohio, The Gallery at the National Western Club, in Denver, Colorado, The Showroom Gallery and The Museum of American Illustration, both in New York City. He has exhibited eight one-person shows in five venues since 2001.

Notable client commissions include: The Boy Scouts of America, Minute Maid, The New York Times, Samsung and the Los Angeles Times. He has also received recognition from the New York Society of Illustrators, Graphis, Communication Arts an Print Magazine.