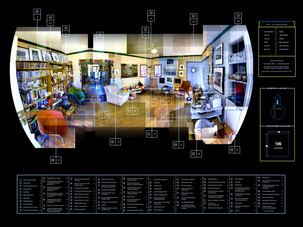 The “LIVING ROOM SCALE PROJECT” is an exploration driven by the convergence of several concepts. In an effort to clarify the underlying subtext that fueled these studies I will briefly explain each individual thread:

FIRST, AN INVESTIGATION OF THE AMERICAN CLASS SYSTEM.

Due to the short duration and the unique history of the American civilization, the United States ambiguously defines social classes. Class titles and qualifiers occasionally emerge surrounding political campaigns, mostly concerned with notions and questions of lower, middle, upper and working class values and voting choices. But, by and large, classism still remains a taboo subject (an undefined, un-divulged and under discussed qualifier of any individuals opinion.)

Most Americans focus attention on the social extremes: top class and low class. Many Americans spend copious amounts of daily energy on the questions and foibles concerning the lifestyles of affluent celebrities or individuals voluntarily trying to survive on remote islands. Few know the difference between the two largest classes in American society: the proletariat and middle.

SECOND, WE ARE A NATION OF CONSUMERS.

Many Americans identify themselves solely through their individual selections from the vast product pool offered by our nation: With the availability of credit- based purchasing the quantity and quality of products purchased is not mutually exclusive to yearly income. Distinctions between middle and proletariat classes are now based on consumer purchasing power and selections rather than the historic distinctions of birth or education.

With the American’s need to purchase comes the need to store and showcase our selections. The most public room in any western home for this activity is the living room. This multifaceted space is used for greeting and entertaining guests, reading, watching television, possession display, and other activities. In many homes, this room is also architecturally denoted as the front room, and typically inhabitants put their “best foot forward" in this space. Visitors can quickly glimpse from the front door a constructed environment with immediate
identifiers glorifying the pursuits and interests of the inhabitants.

FOURTH, THE PROCESS IS DOCUMENTED WITH A PHOTOGRAPH.

Each photograph acts as a map, visually explaining in quantifiable terms the social class of the home’s inhabitants. The photograph also contains information on the age and sex of the subject along with the specific geographic location of the home being studied. Using a point table initially developed in 1935, and continually updated, I apply negative or positive numeric values to selected objects within the living room to determine the socio-economic class of the individual. In addition, each photograph cannot help but express my own
stereotypes and biases on class distinctions. By acting on my own pseudo-science methodology I try to attach numbers to objects based on unproven assumptions. However arguable or revealing each photograph proves to be, they all provide an interesting platform for discussion on the possible distinctions between upper, middle and proletariat classes within American society.

FINALLY, THE QUESTIONING OF ASSUMPTIONS.

What seems to be a somewhat arbitrary selection of 91 criteria for the quantification of a living room is actually rooted in the research and reasoned assumptions of the meaning of objects. The chart contains a staggered stage of objects ranging from the obvious to the unexpected. Not only is the point of the chart to cause the viewer to question the assumptions made between members of different classes but also to question\ the science itself.

The elements that are determined by the physical attributes of the space (flooring, ceiling height, fireplace, curved molding) are straightforward in their assumptions of determining the room’s size and quality.

The points awarded to an oriental carpet varies greatly between new and a Threadbare carpet. Rugs and antique furniture offer an insight into the resilience of the inhabitant to continually purchase new items to maintain popular trends. The importance placed on the history of objects rather than its appearance is a marker of an upper class individual.

Elements like Televisions, computers and books do not necessary deal with the conspicuous
consumption of technology but rather how passive or actively invested the inhabitant is while being entertained.

Televisions provide a passive experience and do not require the viewer to use much mental energy. A computer allows for a slightly more active engagement where the information has to be found and selected and creates greater mental experience. Books however require both a high investment of mental energy to imagine the concepts and situations. The active engagement of the environment is another maker of an upper class individual.

Showcasing ones achievements within the public space of a home is the marker of lower class individuals. Elements of self-propaganda like family pictures, diplomas, self or family made art, and painted portraits are given negative points because of its “bragging” principle. These object are suited for more private spaces in the home, and are of no interest to a stranger.

There are objects within the chart that are more for the viewer’s consideration rather than markers of social class of the homes inhabitants. Motorcycles, Obelisks, obscure periodicals are presented to give the viewer a point to begging questioning the assumptions made by the individuals who constructed the chart and allow them to continue to the less obvious factors the determine American class structure.