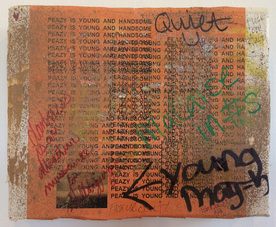 Beginning in 2014, I embarked on a project surrounding a fictional version of myself. Initially, it was rooted in my own egotism and idiosyncratic whimsy. In the following year, I was invited by Randall Garrett to participate in a group show  vision of an "irrational city." I used this opportunity to place the Peazy character in a less disparate context.

What if Peazy was one of many lost souls in a post-apocalyptic climate; an aging first-wave millennial thrust back into the early days of existing in an internet vacuum? Once a struggling writer destined to be relegated to the clickbait bin of history, he becomes a proudly reluctant anti-hero for the return to the blips and bleeps of modems, the crushing anonymity of message boards, the once (and always) depraved voyeurism of video sex chats, and of course, the not ubiquitous availability.

Over the course of time, Peazy becomes Peazus and unwittingly develops a cult following he could never quite garner as a serious artist. Bastardville, while mirroring Dallas, Texas in many ways (systemic racism, gentrification and class warfare, plasticity), is also "Any Town, USA." Peazus' answer is to disappear into the remaining internet void, rising ever-so-often to procure liquor and vamp the streets in acts of violence and theft. A subversive, situationist take on dystopia.

A British-born, Oak Cliff raised, East Dallas resident, Patrick Patterson-Carroll is a writer and artist of 33 years. A father, his first short story collection, "I Dig Symmetry and Six Other Stories" was published in 2014 through Thought Catalog as an e-book. He later became a contributor and also has written for Arts & Culture Texas and Wild Detectives. Currently, he is the co-host of the "What is Cinema?" podcast with Lee Escobedo. Praise for "I Dig Symmetry": None, but rest assured, it is a flawed work of art; ever-so-problematic, entrenched in "punk rock magic realism" and filth.