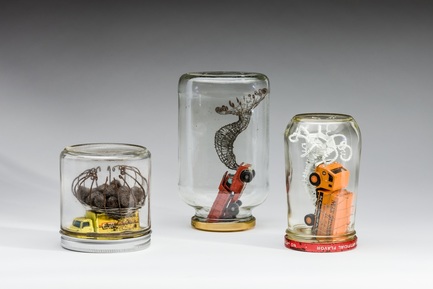 About the Artist(s)
The Nomadic Fungi Institute is dedicated to the research and documentation of the mycological mutation classified as Nomadic Fungi, a mutated species that have functionally adapted to feed on automobiles. They have the capacity to infiltrate cars and extract nutrients directly from them by rapidly biodegrading materials made from oil, plastic and synthetic rubber. The Nomadic Fungi Institute believes these voracious fungi constitute a serious threat to our nation’s transportation system and ultimately to the American way of life.

It is understandable that for a large portion of the public, the idea of a giant fungus eating cars is a little hard to swallow. That is why NFI adheres to in-depth research reinforced by the standards of pseudoscience. If the threat of nomadic fungi is not taken seriously there is a strong possibility we as a society will soon be riding horse drawn wagons on our morning commute.
The Nomadic Fungi Institute was established in 2013. Since its inception, NFI has been aggressively
investigating and documenting all events pertaining to unusually large mushrooms attached to cars. It is the mission of the Nomadic Fungi Institute to inform the public by way of exhibitions, publications and social media about the threat this fungus poses to modern life.

Artist Statement
The Nomadic Fungi Institute has been conducting Spore Sprouting Tests to ascertain if Nomadic Fungus spores can be coaxed into germination and encouraged to grow in a laboratory setting. This exhibition represents the culmination of two years of research and offers a step-by-step guide to the scientific procedures used in these tests.

Although the American government has yet to officially verify or for that matter acknowledge the existence of Nomadic Fungi, there is no doubt that a mutated, invasive fungus feeding on automobiles poses a very serious threat to humanity.

By collecting and then germinating Nomadic Fungus spores, The Nomadic Fungi Institute has taken a dangerous but necessary step in proving once and for all that the existence of this voracious eater of cars is not an urban myth or the hallucinations of drug addled beatniks.

Note: All lab samples contained within this exhibition have been sterilized according to the USDA Containment Guidelines and thus pose no threat to the public or their automobiles.
Selected Available Works
Contact gallery for complete availability and pricing