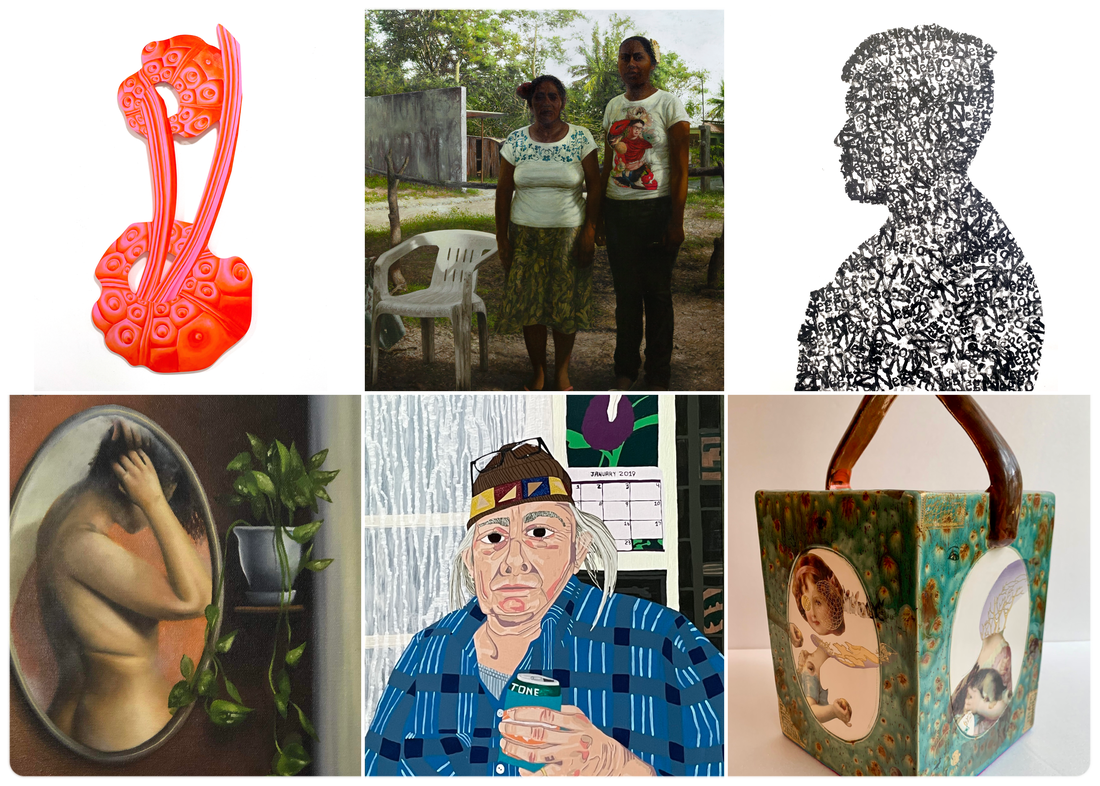 ​On the heels of Ro2 Art’s 12th Anniversary, the gallery is pleased to announce the representation of six new artists: Edgar Cano. Catherine Cornelius. JD Moore, Cat Rigdon, Brantly Sheffield, and Lillian Young. In celebration of the new arrivals to the gallery, Ro2 Art is proud to present New to Ro2, an exhibition featuring the works of the six artists. The show will run from February 19 through March 19, 2022, with an opening reception held at Ro2 Art in The Cedars, located at 1501 S. Ervay St, Dallas, TX, 75215 from 7-10PM.

Edgar Cano: In more than fifteen years of art production, he has been distinguished and awarded in various national and international competitions, among these: Acquisition prize of the III Biennial of Visual Arts of Veracruz (2016) two-dimensional category, acquisition prize of the XVII Biennial of Painting Rufino Tamayo (2016), the award for the IX Biennial of Painting Alfredo Zalce (2014), the award for the IV Biennial of the Southeast in Chiapas (2005), finalist in the I International Biennial of Drawing in Tijuana (2006), prize for the XVII José Guadalupe Posada National Engraving Contest (2010), selected twice by the Takeda Biennial (2008 and 2012), among other mentions. He has obtained multiple scholarships, in the state of Veracruz for PECDA (2005 and 2009), the FONCA Young Creators scholarship (2010 and 2012), and at the end of 2014, he became a Member of the National System of Art Creators of FONCA (SNCA) in the discipline of visual arts with a specialty in painting, again selected in the edition 2021-2024. In 2018, he received the distinction from the FONCA Promotion and Co-investment Program to carry out the exhibition El Centro Único of his authorship.
Catherine Cornelius: Catherine Cornelius is a ceramic and mixed media artist.  She graduated from the University of North Carolina, Chapel Hill, with a Bachelor of Science in Business Administration.  She began her art education in the early 90’s alongside working in the corporate world.  A studio practice began in 2000 and in 2016 she retired from her company enabling her to fully focus on art.  Her art education includes Brookhaven College, the Craft Guild of Dallas, and Penland School of Crafts.  In 2020 she was selected into The Cedars Union, Dallas Tx, Cohort 2 program.  She is currently represented by Ro2 Art Gallery in Dallas, Texas.
JD Moore: I was born and raised in Dallas, Texas, and have been working as a full time artist in the Dallas/Fort Worth area since 2013. I began to seriously pursue a career in studio art in 2017. My shared studio space was located at the Basement Gallery, before we moved to Elevate Studios, in Oak Cliff, Tx. Continuing to collaborate with models to make art, I expanded my outreach to authors by studying non fiction books dealing mostly with history. After I read “The Autobiography of Malcolm X” I made a photo series depicting chapters in the book which then lead me to read “On The Varieties of Mankind”, a book about the accounts of a German anthropologist, Johann F. Blumenbach, whom contributed to the theory of race. I painted a portrait of Blumenbach which depicts him evaluating skulls and categorizing people across the globe in a hierarchy. In this painting I wanted my model in contemporary fashion to help make this character more relatable, as we are still affected by his work. After realizing that fashion plays an important role in portrait storytelling, I decided to expand my outreach yet again to fashion designers. The Tignon series, featuring cloths worn as a turban headdress by Creole women from Louisiana, produced in collaboration with Chesley Antionette in 2018 help me realize that research; teamwork, and depicting people of color in a constructive manner are elements I want to consistently implement in projects going forward.

Cat Rigdon: Cat Rigdon is a multi-disciplinary artist based in Dallas, Texas. She grew up on the island of Cyprus, the island’s strong folk art and naturalism culture is reflected in Rigdon’s work. She graduated from Texas State University in 2014 and moved to Dallas as a Decorative Arts Junior Specialist and Cataloger for Heritage Auctions. She left the auction house after a serious head injury to pursue a studio-based lifestyle. Her obsessively repetitive works deal with her continuous recovery from the brain injury, the mythology of growing up on the island of Cyprus, and artifacts from being an auction catalogers.
Brantly Sheffield: Brantly Sheffield is a Dallas based artist born October 18th, 1991. He grew up in Edmond Oklahoma. In 2010 he moved to Kansas City Missouri to attend the Kansas City Art Institute. He graduated in 2014 with a BFA in illustration. In 2012 he studied at the Studio Art College International in Florence Italy. He studied fresco painting and art history. Between 2013 and 2017 Brantly was represented by The Late Show art gallery in Kansas City Missouri. In 2015 he moved to Boston Massecuites to attend Boston University’s MFA painting program. He earned his MFA in 2017. He shows his work nationally in curated and juried group exhibitions. Brantly has participated in studio residency programs such as the Cedars Union incubator for the arts. He is currently an adjunct professor of art and represented by RO2 gallery in Dallas Texas.

Lillian Young: Historical artist Lillian Young attended Texas Christian University where she received her BFA in Studio Art and an emphasis in Art Education. She has always had a passion for history and growing up her family made sure that she was well educated about the struggles, victories, and heroes in Black history.

Often history may seem irrelevant but has consequences in how we understand and react to current events. Lillian depicts forgotten or not well known moments from the Black experience, focusing on lesser known black leaders, stories, events and objects that are commonly known by the black communities, but unknown by the general public. In highlighting these moments, Lillian works to make a connection to the social anxiety felt today from the rise in racism, loss of representation, and her own struggle of continuing to fight for equality.

Currently she works at the Kimbell Art Museum in Fort Worth Texas, and plans to attend Grad school at Michigan State University in the Fall of 2019.