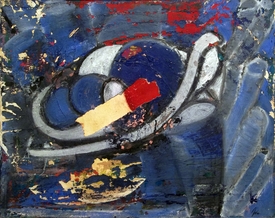 These 'prints' are discarded student paintings which I have reprocessed into a transformed canvas monoprint. I create prints in batches and modify the process as I work exploring various techniques and their results.

I playfully call this body of work “The Strip-off Series” due to the technique itself “Stripping” because the climax of creating these prints is the reveal where the print is pulled from the base 'revealing' the transformation of the original painting and the finished print.

I consider this work related to process art since the technique that I have discovered is by its nature unpredictable and because I have removed my hand as much as possible from the process. Process and aesthetic formalism play heavy roles in my creative process as do re-contextualizing or re-purposing found images and therefore this body of work is also related to pop art.
--  Michael Westfried, 2013

Michael Joachim Westfried, born in Connecticut, graduated with an MFA in Producción Artística “the creation of art” from La Universidad Politécnica de Valencia in Spain and a BA in Art & Performance from The University of Texas at Dallas.
Education:
2009  La Universidad Polytecnica de Valencia, Spain, MFA, "Producción Artística"
2007  The University of Texas at Dallas, Texas, BA, "Art & Performance"