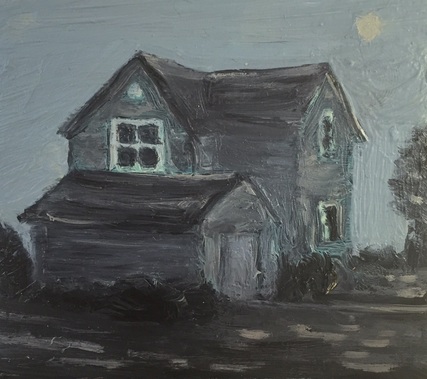 It was an important moment for me. I realized for the first time that this moment I was in was never going to exist again; it would be gone forever, except in my memory. I couldn't bear the thought of that moment ending.

Not that it was a special moment in any particular way; it was just like any other day. Still, I wanted to sit on those carpeted steps forever. Tiny me, sitting just a few feet up from my grandmother, who sat just below talking on the telephone in that giant hallway, as she always did. She held the base of the rotary phone by a slot in the back with one hand as she talked, receiver wedged between shoulder and cheek as her other hand fiddled with the cord. I loved her with every fiber of my being, and I just wanted to sit there and look at her and nothing else. I wondered how many moments I lost when I could have just sat and looked at my grandfather, just taking in all that he was. How could I have been so easily distracted by all the frivolous things in the world when he was there? I knew now I would never have another moment with him; he had died quickly and unexpectedly earlier that year.

It was the end of summer, and the evenings were finally cool enough that the huge attic fan could be turned off, yet all the windows were left open to allow the thick summer air to fill that ancient house. I remember the undulating sounds of locusts and grasshoppers, and the occasional car passing by. The house was just the right distance from the road and up a good five feet or so, where you could hear the rest of the world pass by, but it was so muted it felt as if the house was a completely separate island away from everything else. As I sat on the stairs I could just make out the street and the cars passing by through the large glass door, as the sun was dropping lower in waves and streaks. Grandmother’s back disappeared in the wash of late day.

This light haunts me still, so much so that I try to put everything I paint in that same light, in that same moment, as if I could record everything going on at that moment with every brushstroke I’ve laid down since.