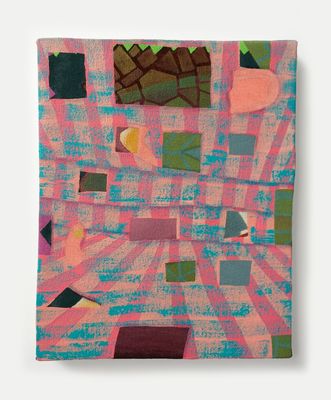 Max Manning is a Houston area artist who recently moved to Texas, after living and working in Kansas City, Missouri. He earned his Bachelor of Fine Arts in Two Dimensional Studies from Bowling Green State University in 2011 and his Master of Fine Arts from the University of Cincinnati in 2014. Max has exhibited work nationally and internationally and is currently represented by TW Fine Art in Brisbane, Australia. His paintings have been shown in The Contemporary Arts Center in Cincinnati Ohio, Trestle Gallery in Brooklyn, New York, The Lawndale Art Center in Houston, Texas, Espacio 20/20 in San Juan, Puerto Rico, and Le Practicable Espace D’ Exposition in Rennes, France. His work has been featured in Maake Magaine, Fresh Paint Magazine, and Studio Visit Magazine.

The artist of today lives in a both cumbersome and liberating realm of infinite resource. Indeed the possibility of originality has long been declared dead. Does that mean the artist shall forfeit their pursuit of creating work that could expand the ever-elastic waistband of art? Or should they stubbornly persist, along the way borrowing and stealing the cloaks of past styles and the shields of isms?

The aim of my work is to be retro-contemporary but not retrograde. That is to say, that, in my own naiveté, I am optimistic to encounter a dead horse along the road and beat it back to life. Once beaten back to life, I may attempt to relate these isms to contemporary human experience. Hopefully, this yields allegorical images that stand upon the timeline of art history with one foot on the past and the other on the present. I approach the history of abstract painting through a cubist lens, exploring paint as object matter and painting as subject matter.

Metaphorically the image plane could be viewed as an immovable object, and though my mind is far from an unstoppable force, it is my hope that when these two meet, the material evidence of this incident will be an image-object of artistic merit. My process is a pendulous alteration between automatism and analysis. The canvas, however comprised, will absorb explosions of raw expression as well as moments of highly controlled focus.

My work is a culmination of stolen ideas, isms, and a great appreciation for the history of painting. Combinations of starkly contrasting visual elements melt together to form images of imperfection. This anarchic visual dialect that I have chosen to adopt speaks to the disorientation one can experience from today’s constant flood of technological over-stimulation.

Bearing in mind the privilege and miracle of this highly developed technological age in which we exist, I am interested in the thinning line between the artificial and the real. The plastic pictures I create are expressions of my own interpretation of the struggle that exists between the visceral, the primal and the artificiality of contemporary human experience.