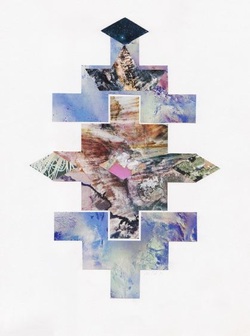 This group of works is a divination of symbolic images present throughout the duration of human life on this planet. Each visualization or object is a study of platonic geometrical arrangement concerned with the individual perception of reality integrated into the elucidation of our collective unconscious mythology.

The collection of collages is an assemblage of natural imagery organized through an abstract geometric formula. The cohabitation of the natural and its abstraction synthesizes the experiential and the conceptual. Wherein each particular component obfuscates categorization – impeding interpretation until viewed in detail and within their spatial context.

The sculptural volume sets out to explore similar transcendental conceits engendered into a dimensional actuality. Wood is transmuted within the confines of its physical properties and reorganized to more closely resemble universal concepts. Totemic expressions of cosmological structure, modeled in sacred geometry and in the hermetic and esoteric traditions.

Seen in sum my work attempts to illustrate a unified aesthetic entity which viewed in two mediums enter through the same doors of perception – a visual initiation into a terrestrial philosophy which symbologically codifies humanity from its origination to our terminus.

Publications
2012 If If If Magazine — Chicago, Illinois