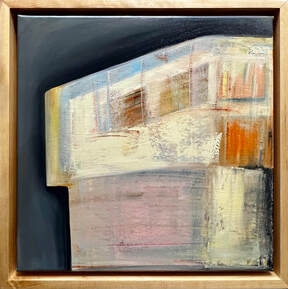 In her yearly trips back home to Venezuela, Marian has witnessed the tragic deterioration of a once flourishing society into its current stagnant state of affairs, inappropriately called the socialist “Beautiful Revolution.” These changes in her beloved country have had a profound effect on her art.


ARTIST STATEMENT
​
Just when I was leaving my childhood behind and becoming a teenager, I moved to the capital city of Venezuela, Caracas, from a tiny coastal town. The radical change in geography struck me in a profound way. Caracas offered me an unprecedented visual chaos, an unbearable density made of improvised architecture, which contrasted greatly with the serene seascapes of my childhood. Volatile and dangerous, the city tightly hugs its mountainous geography, made of a long valley surrounded by capricious hills; opens to spontaneous, lush vegetation ever growing within the urban landscape. Such vast spaces offer a visual respite in the city of concrete hills. The city also displays a profound social division. While certain areas are beautiful, well-kept, upscale neighborhoods, often just a precarious wall separates it from a poor area blanketed by slums where people face tremendous violence and hardship. There’s a certain vulgarity in this critical contrast; after all, Venezuela sits on the biggest oil reserve found in the western hemisphere, and the city functions like a mirror that reflect the deep polarization of my country. There is very little that I can virtually do other than address a few of these contradictions the conflict of political and social realities. My work, then, becomes a mirror of the chaotic visual and social reality of the Caracas’s landscape, which is deeply embedded within my being. Some of my work takes form in paintings on tar paper, the material and the images serve to confront the conflict that is today’s political reality in Venezuela. But there are also other works that presuppose the notion of polarization. In those paintings and drawing, there is a different approach, a construction of a self-portrait that in some way helps recognize my own profound contradictions and ambivalence. Red was taken hostage by the revolution, I’m inviting the viewer to look at the profound rifts and polarization occurring in my native country, while attempting to confront a few realities (and memories) of chaos and conflict, both internally and externally. I keep going back home at least in my work.