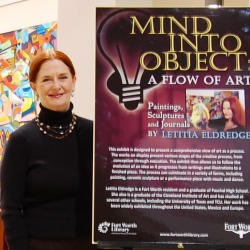 
Letitia Eldredge's lifetime of commitment and dedication to art has led to the mastery of several different media. Well known for her masks and original paintings in gouache and oil, she has created a unique style resulting in dramatic figurative concepts that evolve from clay and canvas to dance design and performance art theater.  Her ideas are poetic and passionate, imbued with humor and eroticism. She tells an intimate mythological human story configured as conceptual symbolism. Hers is an intuitive exploration of emotional and philosophical insights that connect her world to an ancient archetypal resource of inspiration. Through dreams and an underpinning of creative writing, Letitia examines her culture, milieu, and existence with a spiritual dedication.

Letitia began her art education at Sophie Newcomb College, but soon returned to Texas to attend University of Texas at Austin. There she met with two influential professors: Charles Umlauf, notable Texas figure sculptor, and Vincent Mariani.  It was Mariani who corresponded with her along more conceptual lines of inquiry. Mariani also put the challenge and opportunity in place for her attendance at Cleveland Institute of Art.  This venue put her talents in the way of extraordinary modern artists and focused her early career toward New York and international collaborations.

In 1968, Letitia's ceramic art was collected by the Cleveland Museum of Art. In 1973 she debuted her very original, performance art with ceramics and masks, before a select audience of MOMA trustees, ushering her on stage at LaMama ETC in New York City. By this time, Letitia had come into contact with Thomas Messer, then director of the Guggenheim Museum of Art, who put his support behind her ideas with various critiques and introductions. With this production and Hotsun Company she subsequently toured 5 Texas museums. She made her way on to debut in Paris at Theatre d'Orsay (1974) in response to a special invitation from Jean Louis Barrault. In 1976-1978 she received the NEA Expansion Arts Grant then returned to Paris for the International Communications Agency. She was guest artist for Festival d'Autome at Centre Americain (1980). Letitia is a MacDowell Colony Fellow, a Franklin Furnace Archive alum and recipient of several research and teaching Fellowships including the Franzheim Synergy Trust. She has had many one-woman exhibitions including: the Denver Art Museum; The Institute for Diplomatic Relations in Kiev, Ukraine; Museum der Kurnst, Vaduz; Liechtenstein; Gallerie Alexander Iolas, Paris. Letitia has enjoyed a teaching and lecture series at The University of the Americas, Puebla, Puebla Mexico; the Instituto de Allende of San Miguel; University of Nice, France; Mesa State College, Colorado; University of Houston; Rice University and Texas Christian University. In 1997 she worked as artist- in-residence with NeoSoft.com, Houston. While there Eldredge exhibited with Paschal Robinson Galleries. Her experience with technology brought about the compilation of her varied concepts for future online/film communication and providing the impetus for her art today.

A Fort Worth native, Letitia performed throughout (1985-1987) as studio visual artist in residence at Caravan of Dreams. More recently, after 4 years mountain studio time in Colorado, she returned to Texas to create. November 2009-January 2010, the Fort Worth Library presented "Mind Into Object: A Flow of Art", curated by Tom Kellam, archivist and historian for the City of Fort Worth.  This exhibit explored Eldredge art from an archival perspective. Kellam included original manuscripts along with her developed art. His expressed intention points to the artist process of idea evolution linking through literature and imagery themes.