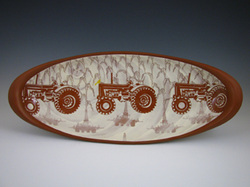 Kip O’Krongly is a functional ceramic artist working with highly decorated earthenware.  Her childhood in Alaska has greatly influenced her current interest in exploring issues of agriculture, energy and transportation through daily use ceramics.  She has recently worked at Northern Clay Center as the 2009 - 2010 Fogelberg Resident, the Material Technician and the 2011 – 2012 Anonymous Potter Resident Artist.  She exhibits work in galleries across the country, including 18 Hands in Houston, TX, Ferrin Gallery in Pittsfield, MA and was featured in the 2012 American Pottery Festival at Northern Clay Center.  Kip was awarded Best In Show at the 2011 Strictly Functional exhibition, was the cover artist in the May/June 2012 issue of Pottery Making Illustrated and will be featured in the upcoming 500 Prints on Clay Lark Book.  Learn more about Kip and her work at www.kipokrongly.com.

Functional pots serve as an everyday backdrop for me to visually explore some of the many issues surrounding food production, transportation, energy use and technology.  Researching these intertwined contemporary themes drives my current studio practice, but the seeds of this work were sown over twenty years ago.  As a child in Alaska I witnessed first hand the devastation wrought by the expansive Exxon Valdez oil spill of 1989.  In the following decades, the essence of that childhood experience simmered beneath the surface, ebbing and flowing with the world’s evolving energy story.  My subconscious rumblings became concrete realities after reading The Omnivore’s Dilemma by food activist Michael Pollan.  Pollan’s book identified a thread running through agriculture, pesticides, fertilizers and oil – intertwining layers that have since become prominent themes in my work.  With his writing shaping my mental framework, I worked to translate his words into meaningful imagery, to bring ideas off the page and place them squarely in reality as physical objects at the table.

Where the written words in Omnivore’s Dilemma initially inspired me to pursue images on clay, the high tech food production documentary, Our Daily Bread, demonstrated the unique power of visuals alone.  Free of dialogue and its overt opinions, Our Daily Bread’s scenes are shot with only the rumbling hum of processing equipment as a soundtrack.  The result is a startling vehicle for open-ended personal interpretation, discussion and debate.  It was Our Daily Bread that encouraged me to pursue my interests in the form of visual questions, rather than rigid statements, to allow users breathing room for their own associations and connections.

The functionality of the pieces I create serves as a daily nudge to reflect on the interwoven nature of our lifestyle choices and the broader world around us.  I relish the process of visually wrestling with contemporary challenges on beautiful daily-use ceramics – creating functional art that by its very nature compels repeated scrutiny.  Ultimately, I hope that with the regular rotation of these pots through everyday moments, users will peel back the layers of my work, open dialog with those who share their tables, and explore how their own personal actions can influence our collective future.