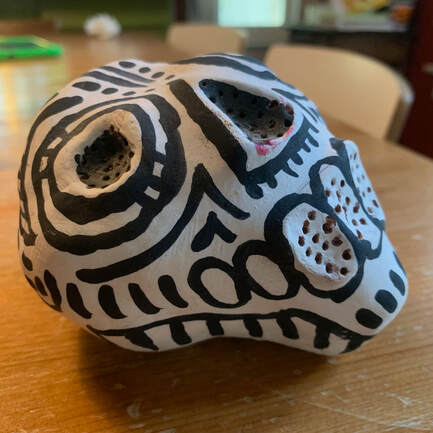 In 2016, I spent weeks at the bedside of a dear friend who was dying of lung cancer in hospice care. In patients with emphysema in particular, the labored breathing in the final stages is often described as a distinct “death rattle” signaling the final breaths of life. I’ve known many friends who have died from lung cancer and I’ve had the privilege to be by their side. This piece is a reminder of the impermanence of life and a play on the traditional ceramic rattles created from clay (created as toys for children in many indigenous cultures).

This ceramic “death rattle” is hand-built and contains a tiny sculpted skull inside, carefully placed there when the tiny skull was bone-dry. The larger piece was sealed before firing so that it rattles when shaken. If broken, the tiny skull will be revealed and will rattle no more.