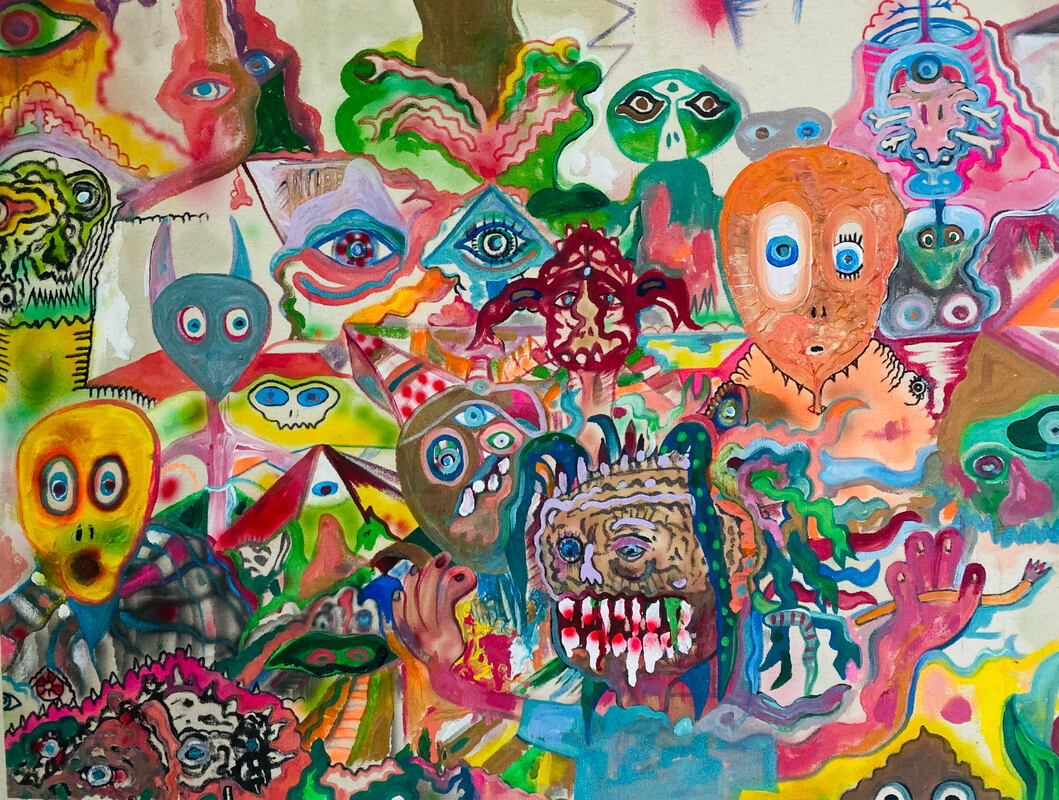 Ro2 Art is proud to present Arcadian Kaleidoscopic Propagation, a solo exhibition featuring new works by artist Jeff Parrott. The show will run from March 27 through May 1, 2021. The exhibition will open with an artist reception at Ro2 Art Downtown located at 110 N Akard St, Dallas, TX and will take place from 12-5 PM. RSVP

Jeff Parrott’s process is activated by sound and a dialogue with the mysterious forces belying the creative urge. Music has been part of his life since the age of 4 when he began playing the violin. The interplay of invisible sonic waves and how they shape perception is the basis for Parrott’s imagery. In his newest exhibition Arcadian Kaleidoscopic Propagation, creatures from an unattainable utopia emerge in polychromatic compositions. Forms are fractured and reflected, they crawl across the canvas in cacophonous and sometimes harmonious ways. Accompanying this exhibition is a live performance by Jeff Parrott, performing works in the musical genre of his own creation: psyexpression.


Artist Statement
Psyexpression is simply the word “psy” which means mind and "expression" meaning expressing self. Together psy + expression, is expressing ones inner mind’s eye of the internal self and one’s invisible reality of the psychic phenomena which is a mysterious awareness of the invisible. (not apparent to others or even seen with the naked eye). Pysexpression brings together the mystical and esoteric side of “something higher and beyond” which one self cannot fully grasp.

In terms of art styles such as Impressionism, Expressionism, Non-Objective, Dada, Surrealism, Religious Art, or art from periods such as art from Prehistory, or the art from Cave paintings, the artist was trying to express themselves. Art work created by the mentally challenged and by those who suffer from mental illness, or those who chose to just doodle or find themselves making psycho doodle art, and those who may have schizophrenia seem to represent that same desire as well to express themselves. This expression of expressing one’s self is a force that has been with us since the beginning of human existence. It is also universal. Creating art has been happening since the time of the cave painting of Lascaux and Altamira. Art continues to intrigue since art possesses mystery and carries with it a clandestine and mysterious force, which adds tension while I am working on creating awareness of my own psyche and drawing a connection with the artists from the past. I connect with artists from the past because I still use the same shapes and the same elements of art today as those artists used hundreds of years ago. However, my topics and ideas are much different due to my psyche and my time period. The only difference in our art is that we live in different times and places so it is how we use them and that is what is so different.

What all of us artists have in common is our desire and compulsion to create. This manifestation from ancient times to our own modern times is that we all practice together. It’s manic mixtures of all of our frantic need to record our very irregular energies and our Self-loathing, alienation, altered-states, self-destructions, fantasies, illusions, fears, happy times, idiosyncrasies, depressive times, nervous times, all play key roles in the way we process and express our own psy. This psy is universal and this is why I feel I need to create. This is why hope my viewers feel that my art is genuine and real. My art is a connection between problem solving and the freedom to express the mysterious side of this supernatural psychic phenomena. I hope that my art can help the viewer find a connection with their own life and fine more meaning in life. My art represents my journey - An unexplainable journey into the mysterious even darker side of mind - a quicksilver muse even Neptunian in nature it pops in at the most random moments and leaves when one mostly does not expect it.


About The Artist
​Jeff Parrott was born and raised in Dallas, Texas.  He began his studies in architecture while attending Texas A&M at College Station, where he discovered an interest in art. While working on pieces, a professor encouraged him to enroll in the Fine Arts program at Texas A& M Commerce. There, he began defining a style for his art which included creatures portrayed in distorted, psychedelic forms. He implemented bright colors into the mélange of images that flowed from his inner thoughts, splayed out onto the canvas. While in Commerce, Jeff was invited to participate in numerous exhibitions, winning awards, and twice becoming a finalist for The Hunting Art Prize. Jeff Parrott graduated with a Bachelor’s of Fine Arts in Painting and Drawing in 2010.

After getting his BFA, Jeff was accepted as a graduate student at the School of the Art Institute of Chicago. While there, he began to realize a transformation into being a fine artist. Spending whole days and nights in the studio overlooking Millennium Park and Lake Michigan, he looked for ways to transpose the chaos around him onto canvas -- reflecting the barrage of noise and energy of Chicago. After receiving his MFA from SAIC, Jeff chose to return to his home town of Dallas, Texas to pursue his artistic career.

Since returning to Texas in 2012, Jeff Parrott has remained dedicated to his studio practice, and has had solo exhibitions with Ro2 Art and The Town of Addison as well as being included in important exhibitions at El Centro College and The McKinney Avenue Contemporary, and featured in Dallas Art Fair with Ro2 Art. He was included as a third time finalist for the Hunting Art Prize, and has been published in the prestigious quarterly publication, New American Paintings. In 2014, Jeff Parrott exhibited Psyexpression with Ro2 Art.