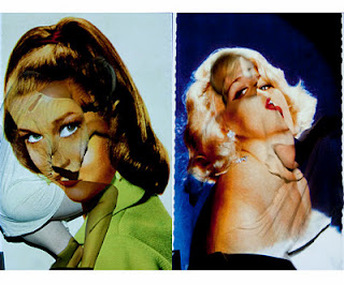 Hillary Holsonback, Jane Fonda (L) and Carroll Baker (R), 2011
Artist Statement
As a self-portrait artist, I use art not to reveal the artist’s true self, but to show the self as an imaginary construct. I use the camera to frame critical investigations of issues surrounding identity, the body, commodity fetishism, voyeurism, and mass media. Most importantly, I explore gender identity through the use of the masquerade in self-portraiture.

Advertisements are the guises I assume. In one fraction of a second, with my camera as my co-conspirator, my body performs a “cutting” intervention to produce a self-portrait that mediates already mediated images of identity. In essence, I literally insert myself into the flow of consumer print culture. There’s a certain point when illogical and logical cease to be contradictions – I produce what is refused by reality.