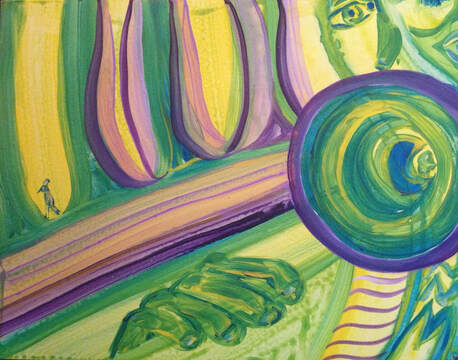 Heather Levy was born in Brooklyn, NY and grew up on
Long Island.
She has been painting since childhood.
Ms. Levy earned her BA in filmmaking from Emerson College, in Boston,MA.
Ms. Levy was delighted to live in Paris,France and immersed herself in all things French.
She has also studied painting at the Art Students League of New York.
10 years working in film production and post production in NYC allowed the artist to explore her Art further, creating Art on Film in the form of music videos and short films.
Since the year 2000 she has dedicated herself to painting.
She left NYC on September 11th, 2001. That just happened to be the day she was moving to Wisconsin. The Twin Towers were literally burning in the rearview mirror. A harrowing day indeed.
A couple of years living in Wisconsin were extremely fruitful and is where the Rocket Science series was created.
After Wisconsin she moved to Washington, DC where she painted, exhibited, and created experimental films for over 10 years.
This is also where she created her best creation, her son.
Ms. Levy has begun a new journey with her family,
Dallas, Texas is the new inspiration location ...
Stay tuned!
​
Artist Statement
​Painting is my passion.
I put a capital A on Art and worship it.
Inspired by life, the beauty of nature, the complexity of humanity,
my journey is one of expressive color and inner exploration.
I try to understand life through observation and meditation.
I communicate my findings through my paintings.
I consider myself a modern philosopher writing with my brush.