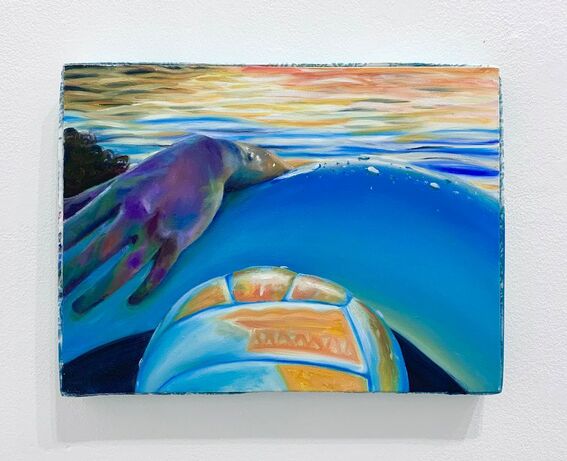 Ro2 Art is proud to present the gallery’s first solo exhibition for Dallas-based painter Hanna Kratsman-Robles. The exhibition will open November 5 and remain on view through January 7, 2022, with an opening reception held at Ro2 Art in The Cedars, located at 1501 S. Ervay St, Dallas, TX, 75215 from 7-10PM.

Nada is a word in Spanish that has a double meaning. It means “nothing” and it also means “to swim.” This exhibition is about a connection and comparison of both meanings of the word Nada. In the series of cropped images, skin, water, and land are treated as the same.  The combined depiction of these elements will show the varying mass and gravity of nature and humanity in both their overwhelming largeness and inconsequential smallness.

Nada documents a lack of awareness – a meditation in nothingness, showing a dissociation of the business of everyday life and allowing the mind to rest, or simply float – with floating being the perfect compromise between two disparate meanings of Nada.

Hanna Kratsman was born in Trullijo Puerto Rico. She moved to the DFW area at age twelve where she later received her BFA at the university of north texas. In her final semester she had the opportunity to study in Florence, Italy. currently, Hanna Kratsman Robles works as an Highschool Art teacher where she shares her love of art with her students.