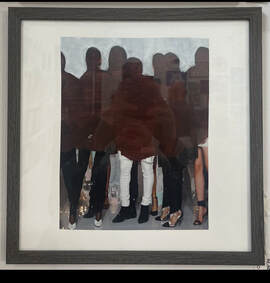 Ed Beardsley earned a BFA at the San Francisco Art Institute in 1991 and a B.S. in Finance from Penn State (1982). He has also studied fine art and business at Temple University, Miramar College, Santa Monica College, and UCLA, among others. Ed has been painting for over 30 years, exploring ideas mostly for his own enjoyment. He showed extensively in the late 90’s and the early 2000’s and still paints actively, but concentrates most of his time now in his role as Vice President and Managing Director, Fine &amp; Decorative Arts, at Heritage Auctions, headquartered in Dallas, since 2009. In Ed’s current series, he rips out printed ads and newspaper imagery often featuring people in a group or a team setting and paints over them often obliterating the individual and forming solid shapes or masses while still conveying a posed group. Ed responds to deep earthy colors which may make them slightly more mysterious and perhaps eerie, which is not necessarily his intention but he welcomes reaction or interpretation in the eye of the beholder.