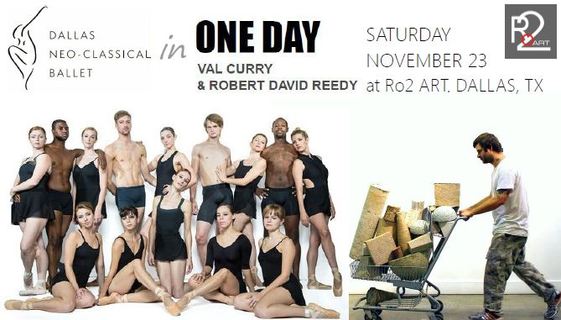 Ro2 Art will host Dallas Neo-Classical Ballet for one night only! Please join us for wine and hors d’oeuvres starting at 7:00PM, followed by a short performance at 8:00PM to celebrate the start of DNCB’s third season and the closing of "One Day", an exhibit of installations by Val Curry and Robert David Reedy in collaboration with MAP.

DNCB will present original works by the co-founders, including “The Formation” by Victoria Dolph and “Yakhalò” by Emilie Skinner.

“The Formation” first premiered last Spring at the Courtyard Theatre and described by Theatre Jonesas “impeccable”, is a duet between DNCB principal dancers, Lea Essmyer and Michael Stone, that focuses on the relationship between two bodies and the reconnection that is found each time the bond is broken.

“Yakhalò” is an original piece first premiered in 2011 for a DNCB fundraiser held at the Texas Theatre and was also shown at Dance for the Planet in 2012. Re-staged to include male dancers, David Sanders and Michael Stone, this piece contains sultry, gypsyesque choreography to the music of Devotchka.

DNCB will also re-stage a collaborative piece from Skinner and Danielle Georgiou (of DGDG: the Danielle Georgiou Dance Group). “What a Doll!” premiered in the spring of 2013 to critical acclaim, noted as “quirk[y]…jazzy, [and almost] cartoonish,” by the Dallas Morning News, and a trip “to musical theatre…[that had] the audience [erupting into] laughter,” by Theater Jones. Set to Fats Waller’s ‘My Very Good Friend the Milkman’, it explores the increasingly bizarre norms of our society due to the mainstreaming of social media and mounting lack of personal connections, which can result in complete social incompetence.

Other works included in the evening’s program are solo variations from Carmen, Sleeping Beauty, Paquita, and Raymonda; and a special guest performance by DGDG (Danielle Georgiou Dance Group).

About DNCB - DALLAS NEO-CLASSICAL BALLET (DNCB), a non-profit 501(c)(3) organization, was founded in August 2011 by Emilie Skinner and Victoria Dolph to create opportunities for experienced professional dancers looking to utilize their classical ballet training. DNCB also seeks to work with DFW-based visual artists and musicians to create a link between the art communities.