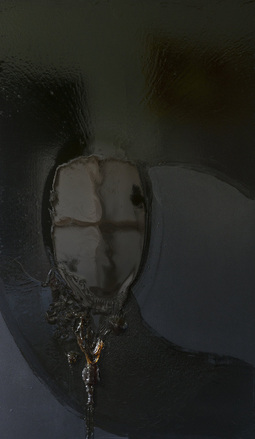 To reconstruct the deconstructive language that pervasively defines the function of postmodern art becomes an inadvertent concept through my visceral abstractions. To reassert the relevancy between formal components with relation to colour, line, form, and space provides the impetus to create an iconography that becomes its own culture. To develop a uniformed aesthetic that forgoes all subjective representation becomes quintessential through a “less is more” directive. My black on black series showcases a procedural aesthetic that challenges the traditions of representational painting and drawing. It is a process that subliminally reconstructs personal and cultural experiences thus creating a visual context in which the artist becomes both the creator and spectator. The level of reflectivity, tactility, viscosity, and monochromatic depth, are all by-products as their invariable characteristics grant each painting it's own unique iconography. While black remains constant, it is elegance personified.

Before graduating from TCU, DJ held his first solo-exhibition at Ro2 Art and since then, his works have been proudly collected by many including most notably, H.E. Dr. Palitha Kohona, Sri Lankan Ambassador to the United Nations in New York.

Marking his return to Texas, DJ will be exhibiting a new series of paintings completed during his two-year study in New York.  His series entitled black on black, exhibits a spectacular abandonment of DJ's earlier ephemerally psychedelic style, yet his works still elegantly possess the same vivid intensity but with a higher grade of sophistication.