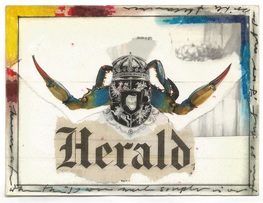 A musician/composer, visual artist, broadcaster, writer, educator and linguist, Dennis Gonzalez showcases a wide array of talents. For the past 40 years, Gonzalez has led the way in Underground and New Jazz styles that have defined the genre here in the United States, as well as in Europe. He has performed in festivals, concerts, workshops, and television and radio programs throughout the world, but he stays close to his roots here in Dallas. Through his lengthy career as a world-class trumpet player, he's collaborated with and helped bring together innumerable musicians. Outside of his own music, he runs the La Rondalla after-school music program in Oak Cliff, teaching young kids guitar, bass, drums, and voice.

To summarize my accomplishments as a visual artist, language and music educator, musician/composer, broadcaster, and writer for 45 years, as well as to summarize my involvement with the community

-Numerous articles, reviews and features in the international music and visual arts press

-Founder and Artistic Director of the Non-Profit La Rondalla, a free after-school music teaching program for students 7 – 18 years of age since 2010 in Oak Cliff