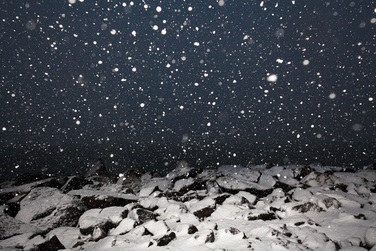 Dannie Liebergot is a visual artist who lives and works in Fort Worth, Texas. She completed her BFA in photography at the University of North Texas in 2015 studying under Dornith Doherty, Paho Mann, and Pavel Romaniko. Shortly after, she was an artist in residence in Ólafsfjörður, Iceland at Listhús Artspace.

Liebergot has participated in national and international exhibitions, including showings with Listhús Artspace in Iceland and the Holly Johnson Gallery in Dallas. She is one of the four recipients of the 2016 Clare Hart DeGolyer Memorial Fund from the Dallas Museum of Art for her upcoming short film. In 2015, she was awarded first place in the 55th Annual Voertman's Student Art Competition. She is also a recipient of the 2014 CVAD Scholarship for photography at the University of North Texas.

As a multi-disciplinary artist, Liebergot surveys the landscape through minimalist compositions and ambiguous moments. Her experiences in nature result in poetic observations of space, both photographic and painterly. Often, her work functions as a meditation on the duality of senses: the conflicting emotional responses that arise when we interact with our environment.

Iceland Photo Statement: trapped in the fjord so we had to walk everywhere

Driving and seeing the landscape from a car is vastly different than walking in it. The car acts as a divide between the viewer and the place. While walking in solitary, senses activate and your thoughts become louder. The natural and unnatural scents become prominent while time slows down to some sort of pacing, step after step evolving into a rhythm.
During an artist residency in Ólafsfjörður, a small town in northern Iceland, I photographed and documented moments on my walking paths. Walking was the only means of transportation for six weeks; it slowed time to an orchestrated repetition of white noise, revealing the beauty of this isolated town. Wandering enabled me to observe, hear, smell, and feel more attentively, thus resulting in a unique bond with the landscape. My thoughts became the cymbals, completing the piece.
Walking in the Fjord represents an organic visual meter of walking around in Ólafsfjörður; a small town nestled in the fjord. These photographs are memories of ambiguous moments and events that took place. Accompanying these images are text pieces and poetry written by my husband and myself during our stay.