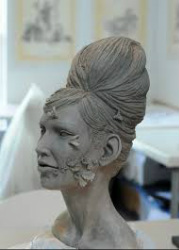 Some of my earliest childhood memories involve traveling.  I spent my summers driving across the country, exploring much of the United States.  I spent endless hours in the back seat of the family van, drawing, folding paper animals and creating elaborate narratives as I watched the landscape fly by.  A couple decades later, I find myself indulging in the same activities but on a much larger scale.   Now, my work involves life-size figurative sculptures and my travels stretch across continents.

In 2009, I had the opportunity to live in Indonesia for one year. “Unnatural History Drawings,” the resulting body of work, deals with the concepts of communication and change. Immersing myself in a new language in an unfamiliar culture often resulted in some confusing and humorous situations. As I traveled to some of the most remote parts of the archipelago, experiencing the rich traditions and customs, I began to see how new technology permeated societies that had remained virtually unchanged for generations. Technology is quickly infiltrating every corner of the earth. My current work confronts the way these changes affect culture. My deep nostalgia and admiration for such cultures wanted to freeze everything in time, thus preventing any future change. The powerful force of nature and time push forward as I observe the dance between change and preservation.

The work I produce is narrative in nature.  The two-dimensional work inspired by this trip has an anthropological feel. Not one of a veteran explorer, but of a naïve backpacker. Viewing each piece as a specimen, I mimic the natural history drawings of past explorers and attempt to document my discoveries in an unbiased way. My newest three-dimensional work is intimately tied to my wanderlust and informed by my drawings.  My work is a visual form of communication. I render the figures realistically in order to confront the viewer directly.  Often, I use objects such as masks, eye gear and breathing apparatus to isolate the figure from the viewer.  The use of black and white also eases the tension between the figure and reality.   I am fascinated with the concept of preserving time. The detailed, time consuming methods used to build the work act as a physical document of time.  Social issues I have encountered on my travels are often a driving force behind the narratives depicted in my work.  They are not issues I seek out but rather issues I try and make sense of after I am confronted with them.  Ultimately, my work is about change.  These bodies of work encourage us to look introspectively at the change in our own lives.