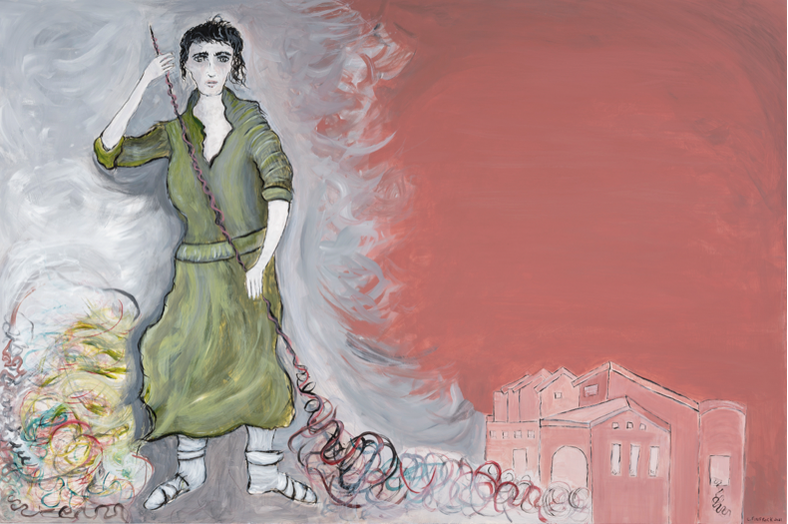 In her newest solo exhibition, The Ties That Bind, Cheryl Finfrock introduces her most recent body of work, which contains unconventional fiber materials such as thread, string, hair, and rope woven through to connect the pieces together in an allusion to Greek mythology. Finfrock explores her figures in relation to themselves and to the greater theme of storytelling while referencing the Three Fates. This series depicts figures in solitude in empty rooms which often reflect back on the subjects’ seclusion. The rooms then act as vessels for human thought and contemplation, leaving the viewer pondering her figures’ next actions.
​
Artist Statement
The Ties That Bind is a body of work spanning just over two years. Images of connective materials like thread, string, hair, and rope weave in and out of these paintings. Continuing this metaphor, I use the subject of The Three Fates: The Spinner, The Allotter, and the Cutter. In Greek Mythology, each fate has a purpose: the Spinner Spins the Thread of Human Life, the Allotter Measures the Length of Life, and the Cutter Cuts the Thread of Human Life. These paintings anchor the theme of “The Ties that Bind.”While most of this work depicts people, frequently alone, the sparse rooms act as a pause and an opportunity. The paintings “The Sounds of a Secret Place” and “Room for Change” reflect the space’s point of view.

The rooms are vessels for human thought and contemplation, left affected by what action the characters take. I researched photographs of abandoned homes which influenced this characterization.
References to sound are in several titles: The Hours Whispered Like Wind Through the Curtains and The Sound Between Words.

How do you draw sound? The silence is as important as the sound.

About The Artist
Cheryl Finfrock is a native Texan from Dallas, presently residing in Austin, where she maintains her studio.

A Trinity University graduate in both art and literature, she explores the figure in its awkwardness, anonymity, and universality, creating a narrative steeped in the tradition of Texas storytelling. The artist states “I like the idea that stories told with images can communicate silently but not necessarily quietly. I regard the picture plane as a stage and those who occupy it as characters of place and person.”  Cheryl Finfrock creates paintings and monotypes on Claybord, paper, canvas, and wood. Narrative expressionism, humor, and symbolism are central throughout her work. Recent exhibits span the US and Europe including New York City, Dallas, San Francisco, Houston, San Antonio, Austin, Berlin, Copenhagen, Montreal, Paris, and Sofia. Her work can be found in numerous public and private collections. Cheryl Finfrock is represented by Ro2 Art Dallas.