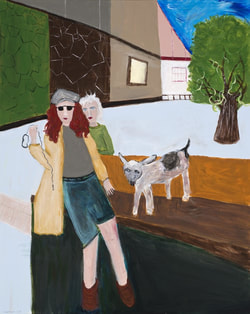 Cheryl Finfrock is a native Texan from Dallas, and a San Francisco transplant presently painting in Austin. She has enjoyed traveling and exhibiting in New York City, the West Coast, and in several European cities, including Berlin, Paris, and Sofia.

A Trinity University graduate in both art and literature, she explores the figure in its awkwardness, anonymity, and universality, creating a narrative steeped in the tradition of Texas storytelling.

“I like the idea that stories told with images can communicate silently but not necessarily quietly. I regard the picture plane as a stage and those who occupy it as characters of place and person.”