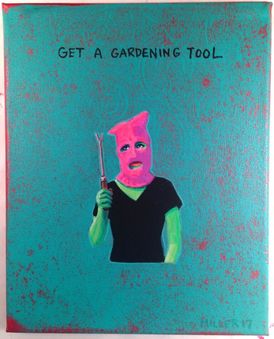 Born in Los Altos, Ca., Cathey Miller grew up in Dallas and is a 1985 graduate of Art Center College of Design in Pasadena, CA. Upon graduation, she moved to New York City where she freelanced as an editorial illustrator, and hung out at the Metropolitan Museum of Art.

In 1987, she moved back to Dallas and established her own painting studio doing work for Interior Designers, Advertising Agencies, and Theatrical Scenery shops.

Artist Statement
Cathey Miller paints  fierce women of various colors and persuasions  often in an outer space setting battling monsters . Her paintings are portrait based explorations into an outer space world centered around the Planet Cathedonia. These figurative images are painterly, colorful, and communicate Cathedonian ideals of truth, beauty, girl power, and heroism in the face of gigantic eagle headed flying intergalactic lobsters.

Miller’s belief  is that space, time,  ladies, and Big Gulps  are all particles of energy that are best rendered in paint particles.  The paintings sparkle with otherworldliness in a very retro tin foil spaceship on a string way. Glitter, metallic paint, fluorescent paint, and bejeweling are all employed to depict imagined feminist utopias.