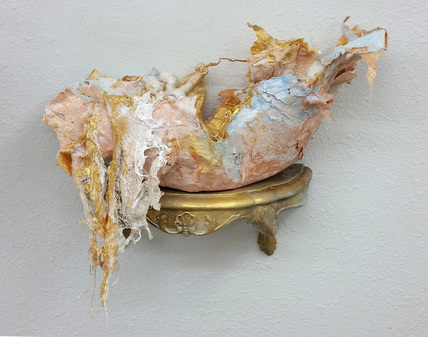 Bonny Leibowitz, Promised Land, 2014
Bonny Leibowitz has been an influential participant of the Dallas art community since the late '80s when she moved to Dallas. The artist studied at Temple University's Tyler College of Art in Philadelphia then worked in the gallery business, representing artists and organizing shows. Eventually, she began exhibiting her work in the region and throughout the southwest. Her one person shows include those in Dallas, Palm Springs, Chicago, Hawaii and Santa Fe, to name a few. Bonny has been recognized for her art internationally through Israel bonds, traveling to Israel in 2002 to participate in a group multi media event /exhibition there and has pieces included in "Arte Internationale", September 2013 in Matera, Italy.

Bonny was the feature artist in Stephen B. MacInnis’s “Have you met …Bonny Leibowitz” blog June 2014. She was interviewed in Papercity, Dallas in 2013, Luxe Magazine 2012 by Nancy Ruhling and by Lynnette Haggard, Lynnette Haggard artist interviews in 2013 and 2012﻿. Her work has been reviewed by Todd Camplin for “Plight Of The Pleasure Pods” exhibition 2013 and “Symbiosis” in 2012 and “Surface Tension, An Evolution Revealed”, 2011 in Modern Dallas.net.

Her body of work “Symbiosis” was presented in the Blurr exhibition with Ben Terry at Cohn Drennan Contemporary, Dallas, TX. August of 2012. Symbiosis was then selected for a solo exhibition at the Museum of Art at Midwestern State University, Wichita Falls by Danny Bills, Curator of Collections and Exhibitions, Francine Carraro, Ph.D Executive Director, with a Gallery Reception and talk: November 9, 2012. The exhibit continued through January 25, 2013.

Recent works have been juried into ARC Gallery by Paul Klein and Shelley Gilchrist in Chicago 2013 and she was a juror for The International Encaustic Association Exhibition 2013.

Bonny was a speaker / visiting guest artist at the University of North Texas in April of 2013. Her presentation at the Sixth International Encaustic Conference in Provincetown, MA in June of 2012 was a featured part of the conference.

Bonny’s body of work; “Plight Of The Pleasure Pods” made its debut at Cohn Drennan Contemporary in “Pleasure Tempest”, November 23, 2013 with a review on the work by Todd Camplin artist/ writer/ critic and essays by Donna Cozort, Ph. D. Diplomate CG Jung Institute, Zurich.

Works from Bonny’s “Transitions” series are included in “Facture”; a group exhibition curated by Cande Aguilar at Beyond Arts Gallery with gallery director Jessica Salazar McBride in Harlingen, Texas September of 2014.

Bonny’s latest body of work; “Suspended Beliefs” will be exhibited at Art Cube Gallery in Laguna Beach, California partnering with the Laguna Museum of Art, November 2014.

Bonny will be a speaker at The Nasher Sculpture Center by way of Pecha Kucha for The Texas Sculpture Association, August, 30th ‘14

Bonny owns The Bonny Studio in Richardson, Texas, teaching acrylic and oil painting: building techniques while fostering individuality and growth and The Encaustic Center as well; teaching the art of painting with wax and hosting nationally recognized guest artists for 3-day workshops in their area of expertise.

My current body of work started in part, with a desire to create a variety of rich inviting surfaces with diverse materials and techniques. I've been especially drawn to concepts of extravagance, indulgence and beauty found in the Baroque and Rococo periods with their “other worldly” pinks, blues and golds.

I’m expounding upon evocative and symbolic attributes of “heavenly-ness”; facades which enlist notions of both vanity and spirituality by over glorifying and embellishing treasured artifacts. I then juxtapose those pristine elements with the presence of decaying vessels and imagery which speaks to earthly struggles.

“Suspended Beliefs” is a look at our ever unfolding truths, the way in which we question what we “know”; the unraveling and transformation of long held beliefs.