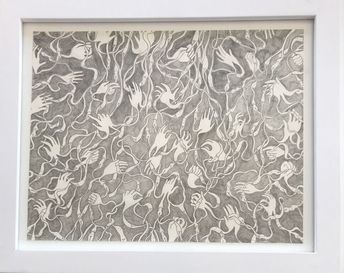 Bella Jones (Manchester, U.K, b.1994) has a BA from Manchester Metropolitan University and is currently in the process of obtaining her MFA from Texas Christian University.  She has exhibited her work in both Britain and the U.S and currently resides between Manchester and Fort Worth, TX.

Fantasy and actuality are the key components in my practise. Taking inspiration from my own physical and mental experiences I construct dreamscapes that juxtapose ideas of desire and disgust and aim to examine and distort commonplace narratives that surround the body. By using hypnagogic imagery I am able to question the interpersonal relationships between gendered identity and sexuality from the perspective of the unconscious mind.
Artist CV