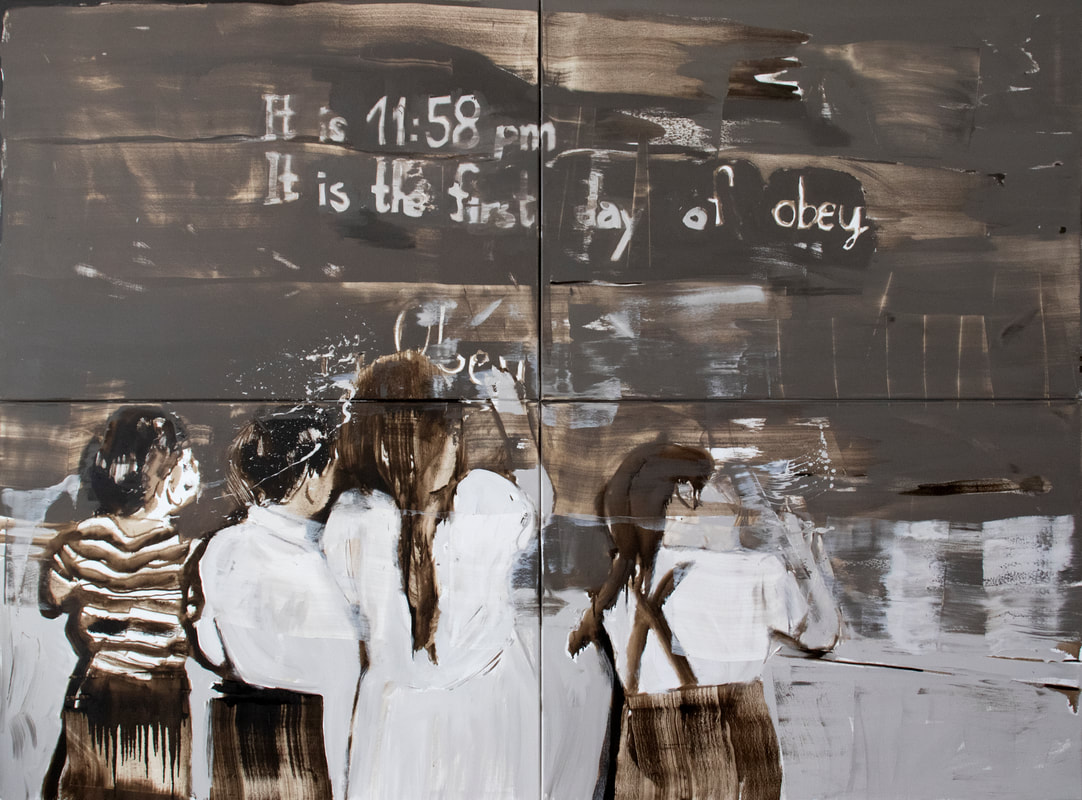 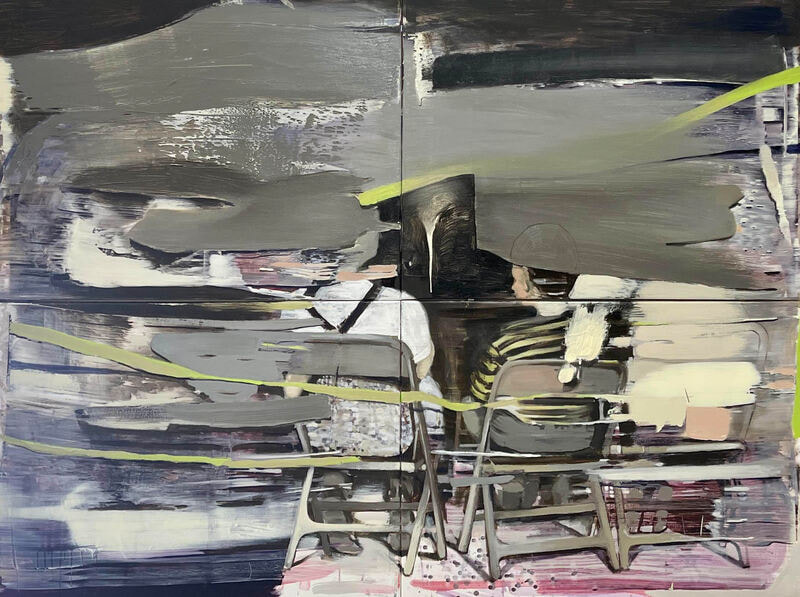 For the exhibition, Two Minutes Before Midnight, Bartosz Beda  introduces new paintings which explore humankind and the issues that societies  grapple with from the past to the present. Bartosz poses questions juxtaposing the indoctrination of children in schools with the looming threat of the end of the world. In his artist's statement Beda states that  “‘warnings’ and emptiness of life itself, where individualism and narcissism are a commodity and not a prophecy of failure.” This statement is a clear representation of the overwhelming dread that wars, climate change, and the rapid change of the human condition can cause.

When I was a teenager, my Polish teacher told a story about archeologists who discovered hieroglyphs that described the youth as uneducated, sluggish, and unable to sustain civilization. I never followed up with the resource of the story and its accuracy; however, it made me think that two things seem to be repeating themselves. One is the lack of attention and inability to have common sense and comprehensive discussions on current issues. The second thing is the "warnings" and emptiness of life itself, where individualism and narcissism are a commodity and not a prophecy of failing. It feels as if it is two minutes before midnight, before a significant cultural, spiritual and intellectual reset that will bring a new beginning. It is not doomsday but a nature correcting its course of "life."

The cautions and disbelief that the time we have now is perhaps mismanaged were given to us by great philosophers and thinkers who saw patterns and seasons in human nature and the history of humankind. Paintings explore the concept of historical patterns following the quote by the German philosopher Georg Hegel who famously said, "The only thing that we learn from history is that we learn nothing from history."

The Greek word "eudaimonia" reverted its meaning and assigned new rules of happiness that are now associated with extremes of joy, external achievements or events, and a lack of capacity to maintain a calm disposition no matter what. Perhaps rational and irrational elements of ethics bring us closer to two minutes before midnight. It all brings us to the great paradox of human nature. Humans as a complete whole and not a collection of parts are prone to false reasoning and mistaken beliefs that create a failure of reason and attachment to the universe's formal logic and rational will.

Imperare sibi maximum imperium est (The greatest empire is to be emperor of oneself" or " The greatest kind of power is self-control").

Born in Poland in 1984, Bartosz Beda relocated to the UK in 2008 to study at the Manchester School of Art. After graduating in 2012 with an MA in Fine Art, Beda was selected for the 2012 Catlin Art Guide as the most promising emerging artist in the UK. Short-listed for the Title Art Prize, the Door Prize, and selected for The Saatchi New Sensations 2012, group exhibition in London for most exciting graduate students in the UK. He won the esteemed Towry Award for the Best of the North of England 2012. Beda was a finalist for the Williams Drawing Prize in Connecticut, the USA in 2014, won second place in the Viewpoints 2014 competition at the Aljira, Center for Contemporary Art in New Jersey, USA, 2014. Recently, Bartosz won first place for Interstate Group Exhibition, CWU Sarah Spurgeon Gallery, Ellensburg, WA, USA, 2017

Beda’s works are in public collection at Reading Public Museum, Brownsville Museum, Siena Art Institute, and Fondazione Per’l Arte, as well as in private collections throughout Europe, the United States, South Africa, and Asia. Before relocating to England, Beda worked on animation in the film industry, including two movie productions, Ichthis by Marek Skrobecki (2005) and Peter and the Wolf by Suzieh Tempelton (2006), which received the Oscar Prize in 2007.