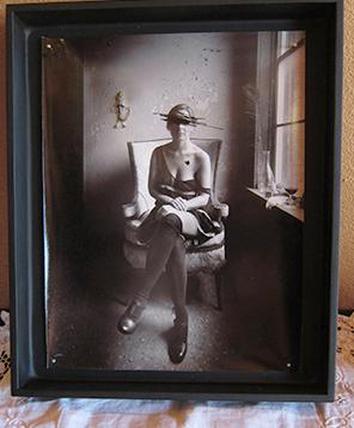 A Beaux Arts style structure built in 1912; the Diaches building housed a street level jewelry store while the top two floors remained a hotel. Between the wars, the neighborhood deteriorated and the hotel was downgraded to flop house status until "Crazy Mary" set it on fire after an argument with her pimp. The fire consumed the pimp's room and the couple's lives. The flop house was immediately closed and sealed off. In January of 2010, The Diaches building was put up for sale and for the first time in nearly 40 years, the upper floors were opened for documentation to Byrd Williams and Elizabeth Mellott.

The collaboration project between Williams and Mellott is an anthropologically based fiction about the characters that inhabited the hotel/jewelry store.

Stepping into the Diaches is like stepping back to the notorious pre-prohibition era of Hell's half acre that lay only blocks away, a Fort Worth Pompeii. The hallways and rooms remain cluttered with artifacts, collecting dust, half burnt, pushed to the side. Gathering relics, re-creating scenes, interviewing people, we reinvent those lives that seem so bleak to us now but must have held something of worth in those mid century decades of North Texas.

Mary wasn't certain if it was the sunlight streaming in the through window or the pounding of her head that woke her. Lying in the filthy bed, mid-afternoon on the second floor of the Diaches Hotel, Mary struggled to find her senses. She was sick and her yellowish skin was covered in bruises. The client had left on his own and she was not sure if he had settled up with Alonso or even crossed his path. This will not be good. Mary shuffled up the stairs to Alonso's room. Alice answered the knock and brushed by Mary without a word. Alonso had a number of employees, who did not bother her, but this new one did. Thin and 19, Alice was staying in his 3rd floor room at the Diaches where Mary had roomed off and on for 20 years, until Alonso had asked her to leave. The room smelled of sex and liquor. After a mumbled explanation of the previous nights receipts, Al blandly struck Mary hard enough to upset her balance and land her on the bare wood floor. This wasn't the first time for him to strike Mary, but in the presence of Alice it was more than she could bear.

The next thing Mary was aware of was leaving the Little Café and Bar and stumbling towards the Diaches. She had in her hand an expensive cigarette lighter that she had stolen from a man at the bar.